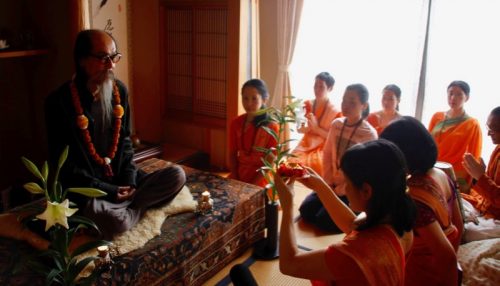 It began by a Puja, and then eight gurubai offered a speech (worked on over the past 9 months), the focus of which for this year was Shri Ramakrishna Paramahansa.

1  Mirabai: The Life of Shri Ramakrishna—the Great Thirst for God and Renunciation, and the Salvation that Follows

2  Chaitanya: The State of Ramakrishna’s Satori—the Blessing and Guidance of Bhavamuka

4  Anandi: the Servant of God—Latu who was Guided by Ramakrishna

6  Sarani: the Blessing of God Incarnate and Its Tool—through M

7  Yogadanda: the Path of Bhakti Yoga 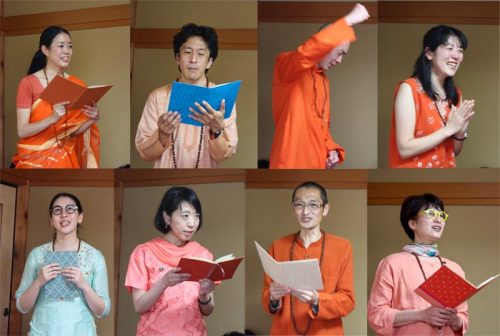 (We will introduce some of the speeches in Pranavadipa Volume 54 that will be published on May 8th, 2019.)

Throughout the entire program, Shri Mahayogi’s face was radiant and his expression was very content. He appeared as if he kept looking far off somewhere, as if immersing himself in the time of Shri Ramakrishna or immersing himself even further into the future, as if to bless the souls of many future generations. In fact, after all the speeches, as if giving us a hint of precisely that, Shri Mahayogi graciously offered a profound message. May we all contemplate deeply the meaning of the message he bestowed upon us and the significance that is beyond time and space of words that are offered by an Avatara.

At the very end of the celebration, all gurubai together offered the Acandalapratihatarayo, the song that Swami Vivekananda created for his Most Beloved Master, Shri Ramakrishna!!!

Sananda and Madhri who served as the MCs

Here we would like to share the words that Sananda, one of the MC’s of the ceremony, spoke after the Puja and speeches had been completed.

And to end, we will share the Master’s words to all.

“We have received such powerful messages from these eight gurubai. Again this year, we have had such a deeply potent and meaningful time. “There is only the Eternal Truth that God is the only Reality!”—hearing these speeches I felt like each and every person was declaring that!

I truly felt that Shri Ramakrishna, the way he lived, his Satori, his teachings, and his workings have surely been communicated to our hearts after a century and a half, and at the same time, I feel that all of this [was made possible] because of Shri Mahayogi’s Existence and Guidance.

‘Because Shri Ramakrishna was so excessively pristine, his workings were also pristine, therefore he performed such enormous works that they are incomparable, paralleled by none. The Existence of Truth travelled throughout the world, and planted seeds that go on eternally. There is … no way to express him but Brahman itself.’

Shri Ramakrishna’s Satori and the way he lived—just as his direct disciples who surely inherited these things, and just like with the Ramakrishna Mission, which serves as their base, may each and every one of us, and this Mahayogi Mission inherit the sacred Satori of our most beloved Master, Shri Mahayogi, and declare Sanatana Dharma throughout the world by taking it upon ourselves to become the tools of God!

On this auspicious day, I humbly offer my everything to the holy feet of all Avatara and of Satguru Shri Mahayogi Paramahansa, a great being who guides us through unfathomable divinity, a manifestation of Brahman itself. And I declare that I will do that!” 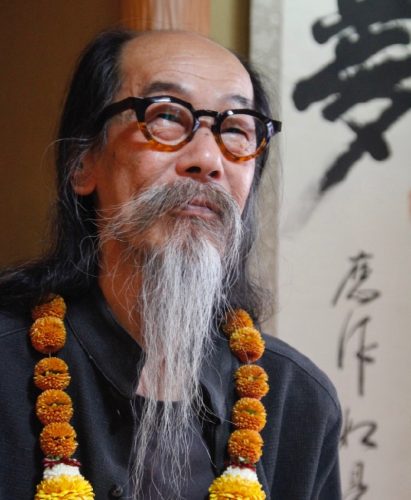 “Whenever the world is filled with unrighteousness, and the Truth or Justice declines and is forgotten, at that time, I myself appear on this earth in order to annihilate the wicked and to reestablish the principles of Justice (Dharma)”—[these words of Krishna express] a reason for the [incarnation and existence of] the Avatara, the incarnations of God on earth.

And there is another reason, “There is no duty for me to act [in the world],” nor do I have anything to gain or attain—that means he does not have karma, therefore there is nothing that he must do in the world—“yet, I am engaged in action so that all will follow my example”—[as these words of Krishna express], the Avatara, taking on human form, demonstrate concretely the way people should live through the actions they take in their own lives.

During Buddha’s time, the ideal way of living [for the realization of the Truth] that he taught was to become a monk. However, times have changed, and in this current time, becoming a monk is not easy. Nay, it is rather not even necessary to distinguish between monks and householders anymore. A complete renunciate in ancient India lived in solitude on a mountain or in a forest, nearly naked, so this is not how it is in Japan, where becoming a monk means living in a temple where everything [you need to live comfortably] is already provided. The condition in the present age is such that there is no longer any meaning in becoming a monk. Therefore, there is no need to distinguish between monks and householders. Each respective person, in each respective situation, can realize the Truth! Because the Truth already exists here. It is not something that you go somewhere to acquire. What you have to do is simply get rid of the obstacles, the activities of the mind, that are slightly (smiling) covering the Truth. That is what Shri Ramakrishna referred to as discrimination and renunciation. If they are practiced, pure faith is born naturally [in you], and then that will lead to that faith getting closer and closer to the Truth; and then [eventually], you will become one with the Truth and all the actions performed for the rest of life, that is to say, the way you live, will become exemplary. That is what Krishna refers to as actions without any intentions or attachments. And also, there is a secret hidden within the flow of change of the era, and an example is discreetly set for the future.  Because everything is True Existence, in other words, the Truth of God, and Its manifestation. The mantra that expressed That straightforwardly is ‘Om Tat Sat Om’.”

Then Shri Mahayogi, with a smile and light tone of voice, said, “Now, everyone together.” Joyful laughter arose from all.

There is only That! 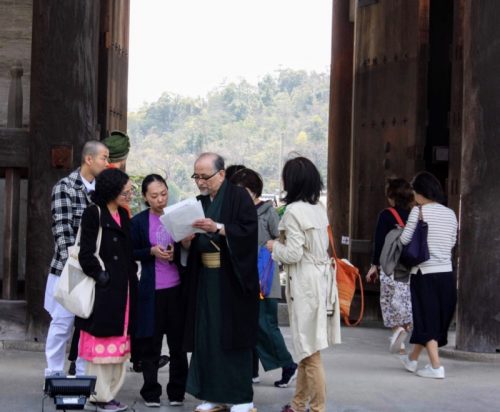 A tour to the Prema Ashrama through the Ninnaji Temple guided by Mr. Takahashi, wearing a formal and traditional Japanese style Kimono 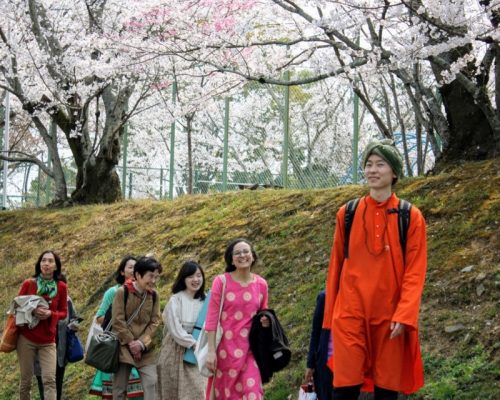 Gopala leading a tour through the cherry blossoms 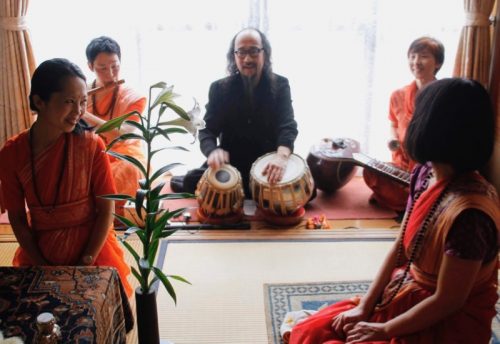 Inside the Ashrama, the music has already begun 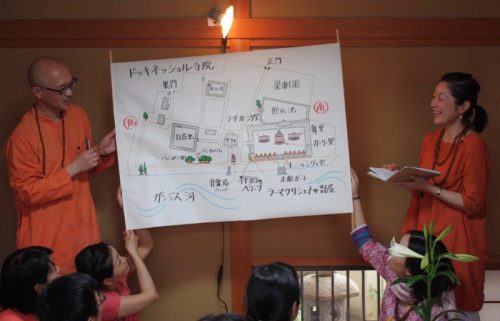 Thinking of Shri Ramakrishna, viewing the Map of the Kali temple in Dakshineswar 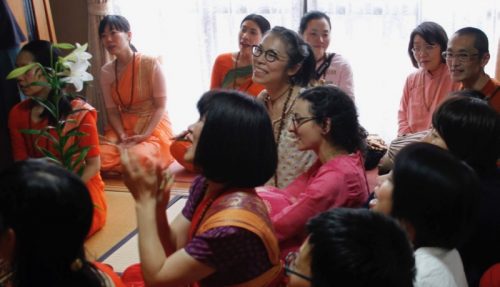 Reading of The Gospel of Shri Ramakrishna, Hare Rama was sung by all, Anandamali and Prapatti from NY were present 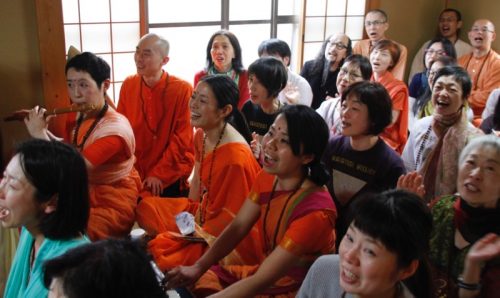 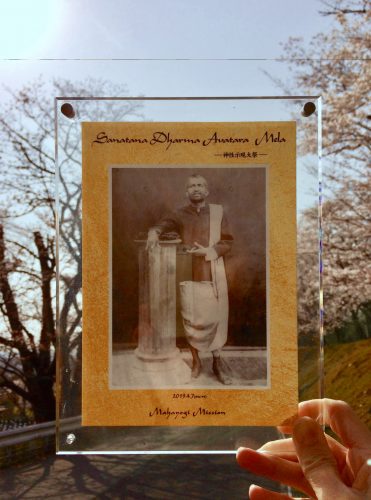 “Whenever there is a decline in righteousness and an increase in unrighteousness,
at that time I manifest myself on earth.”
—Bhagavad Gita 4:7

“To protect the righteous, to annihilate the wicked,
and to reestablish the principles of Dharma,
I appear on this earth, age after age.”
—Bhagavad Gita 4:8

“There is no duty for me to do in all the three worlds,
nor do I have anything to gain or attain.
Yet, I am engaged in prescribed duties.”
—Bhagavad Gita 3:22

“For if I did not carefully perform the prescribed duties,
all men would follow my path in all respects.”
—Bhagavad Gita 3:23

“If I ceased to perform prescribed actions,
all these worlds would perish.
I would be responsible for the pandemonium that would prevail,
and would thereby destroy the peace of the human race.”
—Bhagavad Gita 3:24

“As ignorant people perform their duties with attachment to the results,
so should the wise act without attachment,
for the sake of leading people on the right path.”
—Bhagavad Gita 3:25

The Sanatana Dharma Avatara Mela ceremony is set to begin at 2pm in Kyoto, which is 1am in New York time. Today is the day that we contemplate upon the existence of the Avatara, with gratitude for their having descended onto this earth to lead us to Eternal Life, our true nature, our true Self—God.