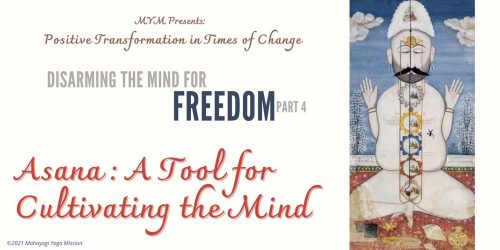 With our eyes fixed on the external world, internal observation of the mind is more challenging than ever before. Glimpse just beyond the realm of our immediate perception, to the battle waging constantly within our minds that keeps us in an un-free state, and seek together with us to disarm its factions in a step towards Freedom.

In past programs, we have been working on the recognition of the unfree state of our minds, dependent and vulnerable to external conditions. In this next program, we will introduce an important tool for us to use to assist in this process—asana (physical postures of Yoga).

The first step in cultivation requires seeing what’s already in the field, recognizing what’s already in the mind—no matter how entangled and overgrown it may be with its own activities. Asana is a practice that can help us not only begin to see the field, but to also start clearing away the overgrowth. In this program, join us in our learning about what asana is, where it comes from, the importance and significance of it in cultivating the mind to walk on the path towards Freedom—and experience a small taste of asana for yourself.

Speakers: Karuna and Sadhya
Suggested: Please arrive without a full stomach to have the opportunity to experience the maximum benefit a few seated asana (physical postures) that will be introduced during the program.

* Tickets will be available for purchase for up to 24 hours in advance.
* Please note that using Zoom is required for attending the program.
* You will be emailed a Zoom link on the day of the program.
* We will be happy to provide technical assistance to anyone who may need it.
* We will open the Zoom space at 6:15 for attendees to enter and test that zoom is working properly.
* We highly encourage you to connect early to troubleshoot any unexpected issues and then return just before 7 pm.
* On the day of the event, we will post a contact number here for any technical issues that may arise.

Please reach out to info@mahayogiyogamission.org for inquiries about this event.

Report and Youtube video of Positive Transformation ~ The Story of Freedom 2: Self-Reflection (Blog 149) 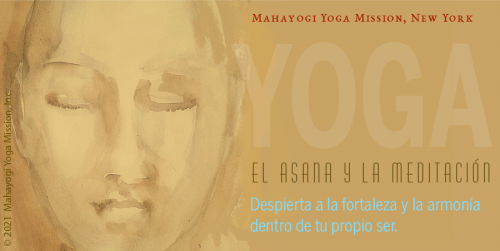 We’re very pleased to introduce Mahayogi Yoga Mission’s first Yoga class in Spanish. This is an introductory class, designed for people who have never practiced Yoga or have not yet practiced asana and meditation as it is taught by our Master, Satguru Shri Mahayogi Paramahansa.

In this class, there will be an introduction to what Yoga is, to the basic postures of asana (yogic postures) and to meditation.

Asana:
• Along with the help of a demonstrator, each asana is instructed verbally with care and detail. Specific adjustments or modifications are given to each practitioner accordingly.

Meditation:
• The basic practice of meditation (an introspective approach that guides the mind through meditation) is introduced, as well as the appropriate sitting positions for meditation.

Q & A:
• Time at the end for some conversation with the opportunity to clarify any questions and share practical and useful teachings of Yoga.

This past Sunday, March 21st, the first Asana and Meditation class in Spanish welcomed some attendees new to Yoga and also some with experience who were looking to deepen their practice. Though not physically together, the virtual medium allowed us to meet Spanish-speaking practitioners from Puerto Rico, France and Spain in a charming togetherness. 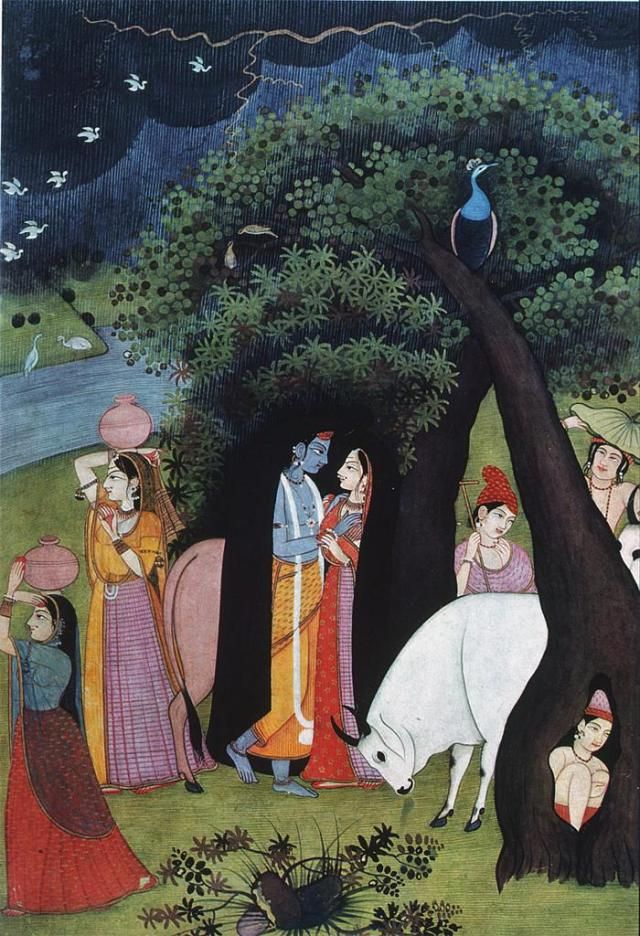 “If a person could reach Satori by reading books, then all scholars would have already reached Satori. However, throughout the history of the past tens of thousands of years, there is not a single precedent for that. The most important thing is to come into contact with the Existence of Truth. Even if this Existence does not utter a single word, this is of no concern—for the Truth is beyond words to begin with.

In India, after one has completed all one’s studies, [it is customary] to wander around seeking the darshan (blessing) of a Guru, just to receive even one single moment of darshan. The darshan of a Guru is above hundreds of thousands, or rather, countless scriptures and words.”

The content of the Satsangha in this month’s Pranavadipa, Volume 75, can be summarized with these words of Shri Mahayogi above.

In MYM’s last online program, Disarming the Mind for Freedom Part 3, one of the central themes was the story of our mind, captured through the stories of “Buddha and the Farmer” and of “Jesus and the Adulterous Woman”, which were depicted at the beginning. From the former, we learned that the farmer became a disciple of Buddha after the encounter with him, and from the latter we learned that the woman later became a disciple of Jesus after this incident. But why did they become disciples? What did their hearts see in Buddha and in Jesus? It must be the Light that shines from such Holy Beings, and the words, infused with that Light, that are delivered by them. It is said that the Truth is within each one of us—that we are That. As it is said, when we encounter that Light outside of ourselves, the Light within us also resonates, and if our hearts are open and ready to listen with humbleness, there is something that shifts within us—this is the story of the mind that was captured in the program by these two accounts, and it can be our story too.

“Shift”—in everything that Shri Mahayogi is teaching it seems that at the core there is a shift that is required in the practitioner. A shift of the mind that makes one want to live one’s life according to the Truth, rather than according to karma, a shift that makes one want to give up the old ways of the mind and make space to learn and receive what the Guru is constantly offering us, and a shift towards seeing the need for the Truth to continue beyond our time in this world and, as such, acting towards making the Truth come to life and be realized in our own lives so that that same Truth bestowed by the Guru can be passed along beyond the time that the physical body is in existence.

How often do we welcome all the situations and circumstances that life brings to us—good, bad and everything in between—with open arms and an equal amount of gladness in receiving what arrives before us? How often can we recognize the grace that is being given to us moment after moment, or do we more often forget about it, and rather become tangled up in the situations and circumstances themselves? The opportunities to purify our minds, to transform ourselves toward the Light, the original state within us that the Great Enlightened Beings show is right in front of us in each and every moment. If we want to attain that Light ourselves, we need to boldly shift our minds, taking steps towards It by using our own actions.

As a key aspect of actualizing that, using the example of Shri Ramakrishna and his disciples, Shri Mahayogi emphasizes the importance and implications of disciples proactively modeling their lives after that of the Guru or of a holy being, saying that “as long as you have a physical body, that [way of living] will become a fortunate gift to your surroundings and relations; and even after your role in the physical body ends, how you lived will continue to have a further effect on the work [you completed and left behind during life].”

Actually, in the Testimony of this month’s Pranavadipa (Vol. 75) and of the next (Vol. 76)—“Guided by Another Teresa: The Little Way of Saint Thérèse”—we find a concrete demonstration of this among us right now.

This month’s Testimony is the first half of a 6-article series written by Yukti, and was originally published in Paramahamsa (Mahayogi Mission’s monthly magazine in Japanese for members) over several issues spanning from 2014 to 2015. Yukti is a disciple of Shri Mahayogi in Japan whose series of articles “Living on the Words of Mother” was previously published in Pranavadipa (Vol. 67, Vol. 68, Vol. 69).

As Yukti studied and learned from the ways of Mother Teresa, originally seeking out the best way to serve the dying, and then the meaning behind the words of Mother, “Be holy”, she naturally tried to model her own life after that of Mother’s and understand the intentions behind Mother’s actions. But, her doubt in herself to be able to truly understand kept her searching, and in this search she came across another Saint, Saint Thérèse of Lisieux,[1] who Mother Teresa had modeled herself after.

[1] A well-known French Carmelite Saint of the 19th century. She lived a short life of 24 years and is known as “The little flower of Jesus.”

As we read Yukti’s articles, which open a window into the life of Saint Thérèse, we also can see how ardently and seriously Yukti strives to understand who Saint Thérèse was and why Mother would have modeled herself off of her. Not only does Yukti study and read the autobiography left behind by Saint Thérèse, but she wastes no time in modeling her own actions after those of Saint Thérèse.

Yukti’s effort to learn from the “little way” of Saint Thérèse (making small sacrifices in mundane things in order to love God) by incorporating it into her own daily life activities shows us a very concrete example of this shift that each one of us can work towards making within ourselves. In fact, in a variety of examples in this Testimony we can clearly see how Saint Thérèse must’ve completely shifted her own mind again and again, not allowing the mind to follow the ways of its own ideas, its likes and dislikes, and, in her case, offering up everything of herself only to God—her Spouse. As we read Yukti’s article, we can see in her example so evidently that this shift is also followed by Yukti. The “little way” of Saint Thérèse is nothing grandiose, it is a most practical training for anyone, anywhere, and certainly by seeing the example of how Yukti takes that “little way” and brings it to life in her daily circumstances, we can see just how accessible and practicable working towards shifting the thoughts of our minds and our resulting actions really can be. And—we must say, that this example is not to be taken just as something to do once or over a short period of practice, but rather, with having a clear aim, the consistent discipline over a long period of time that is needed, along with positive willingness, becomes possible.

Beyond that, we are once again so inspired to catch a glimpse of the way Yutki strives to learn. She stops at nothing and is constantly assessing within herself where she sees a lack, comparing her ways to the ways of the saints and then trying to raise her self, her lifestyle and her understanding to match those of the saints more and more precisely.