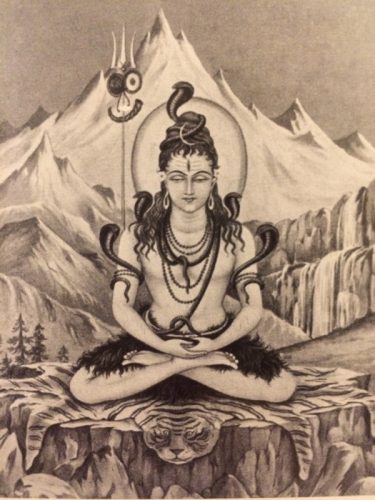 Mysticism is something that is intertwined throughout all of the world’s major religions. Upon first impression, mysticism may seem like something magical or something that is only experienced by religious fanatics who adhere to rituals and little understood practices. Or perhaps mysticism is shrouded with an intangible atmosphere. What does it mean? What do the mystics know? What do they do? Such things may pique our curiosity, but seem to stay in a realm that is seemingly unseen, and therefore unknown.

Many practitioners of Yoga have probably at some point had the opportunity to read the famous book by Paramahansa Yogananda, Autobiography of a Yogi, and for many of us, this book may be one of our first introductions to the real Yoga of India. And as many of you may have found, it is full of things that could seem quite mystical, yet quite fascinating! Indeed, mysticism exists among the yogi too. And to take a step even further back into the mystic history of India, for those who have had the good fortune to come across the accounts of Shri Ramakrishna from the 19th century, it is easy to feel struck with awe at his practice, his devotion, and his experience of God.

But both the world of Paramahansa Yogananda and that of Shri Ramakrishna seem to exist in the past and it is only through books that we have been introduced, not through seeing such things with our own eyes or experiencing them for ourselves. So it can be easy to feel that such strange and mystical experiences of these mysterious unseen realms remain covered in mystery, out of reach, a thing of the past, or at least something that perhaps only happens in India.

But as we practice Yoga under the guidance of a true Master, such as Shri Mahayogi, we can increasingly understand that mysticism is far from a mystery or some imaginary thing. Rather, what may be deemed as mysticism by some, is actually incredibly concrete. Through the actual application of the practice of Yoga, it is truly possible and guaranteed that one increasingly comes to experience firsthand that which at first seems unseen. In fact, it is as if the unseen comes to be seen with crystal clarity. And the mystery around mysticism fades away.

The practice of Yoga is truly both concrete and mystical!

In this month’s issue of Pranavadipa (Vol. 38), one of the topics we have the opportunity to learn about is the similarity of the paths of raja yoga and bhakti yoga as well as the mystical union of the two. Love of God, practice of asana transforming into mudra, mudra leading to Samadhi—Shri Mahayogi concretely delves into the subtleties of these topics at the inquiry of attendees and provides us with the tools to pull the veil of mystery from around some of the more mystical aspects of Yoga and concretely experience them for ourselves.

In the Testimony, we have the opportunity to read two messages that were delivered to Shri Mahayogi during the occasion of Jayanti (celebration of the Holy Birth), which took place this past November, 2017. (Echo from The Cave 63) Interestingly, these two messages from Sharmini (who lives in Tokyo) and Sadhya (who lives in New York), written from their own personal experience on the path, are filled with bhakti (devotion) and gratitude toward Shri Mahayogi, as well as their firm resolution to continue on, and are a testimony to the very content that is contained within the Satsangha of this issue. 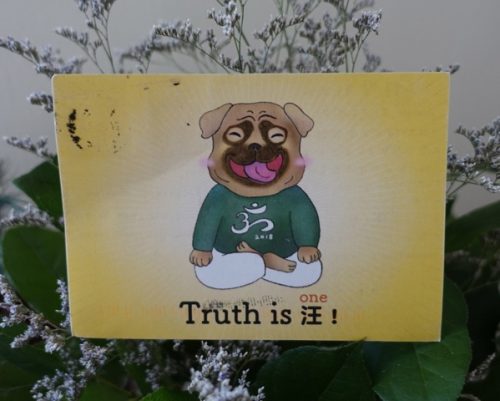 2018 New Year’s Card “Truth is 汪” received from the Sangha in Taiwan!

But no matter how their bark may sound,
in 2018, the year of the dog according to the Chinese Zodiac, 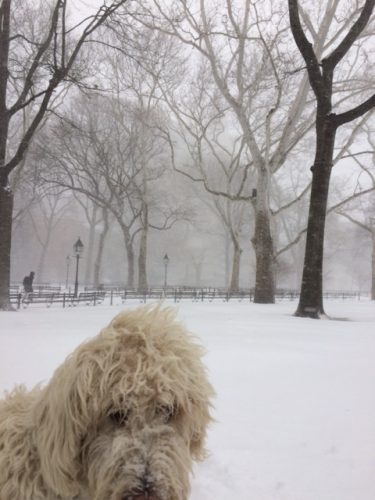 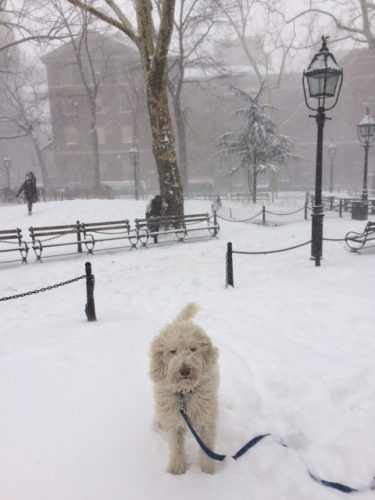 Tavia, a neighbor’s dog who is adored by Shri Mahayogi, at Washington Square Park yesterday in NYC’s latest snow storm

And tomorrow will be even colder…. 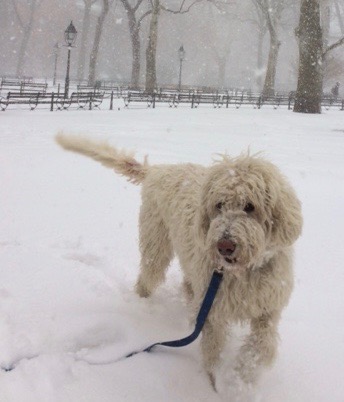 GREETINGS: Our Beloved Shri Mahaogi and Everyone,
HAPPY NEW YEAR from New York!!! 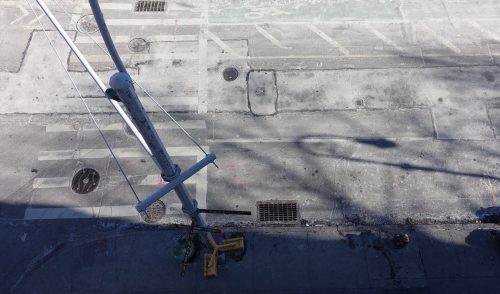 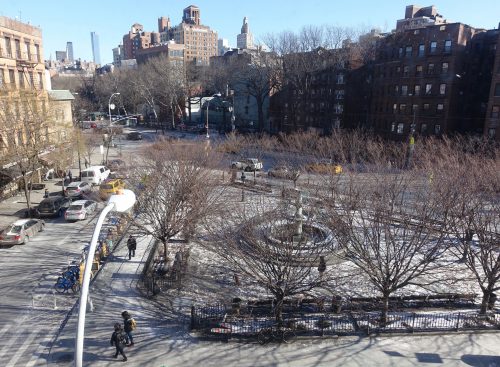 The very first day of the year 2018 begins frosty and crisp.
May you find fulfillment and joy in the year 2018.