DEDICATION:
The image of Sahasrara Chakra (Thousand-Petaled Lotus) used for the PROJECT SAHASRARA blog, is a symbol of Satori, Awakening. It came from the tapestry created by our Master, Shri Mahayogi in 1976, the year Mahayogi Yoga Ashrama was established. Shri Mahayogi designed it to symbolize Yoga, and one of his students from the inaugural year dyed the tapestry. This piece is especially treasured as the first artwork he created since the establishment of the Ashrama.

In the center of the sahasrara, surrounded by petals, each of which are delicately painted, the symbol of the Holy Feet is drawn. In the most ancient times, the human form was not used to depict God or Buddha (an Awakened Being). Instead, the Bodhi Tree or a Dharma Wheel were said to be used to convey their Existence. Truly, Buddhapada (The footprint of Buddha) is a symbol of Supreme Existence or the Truth itself. Furthermore, such symbolic forms must have come from concrete realization experienced by yogi in deep, profound samadhi, which they then revealed as a gift for generations to come. 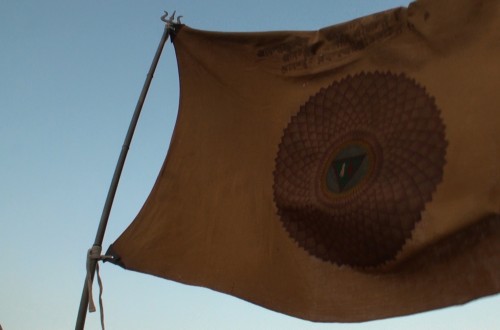 Isn’t it fascinating to see this image of Truth drawn by an Enlightened Master, Shri Mahayogi?

Isn’t it fascinating that Sri Mahayogi drew this symbol, of the sahasrara, which is the final chakra, and representative of the sole aim of the practice of Yoga?

Isn’t it fascinating that Sri Mahayogi drew footprints in the center of sahasrara chakra? It must be the symbol of Lila, the True Reality!

Isn’t it fascinating that the great yogi have left us these symbols that lead us to the Truth and, at the same time, are the Truth?

So then, how is the Truth revealed?

When the mind is unveiled, the Truth emerges!

Through single-pointed concentration all is revealed!

It is the same now as it was in the past. Until recently, the teachings of Yoga were not readily available and were conveyed only to those who were truly seeking above all else, driving them to search for the teacher who abided in that state of Truth. Even though today there is a multitude of information at our fingertips, unless one really wants to know more than anything else, the Truth will not be revealed.

Yoga requires one to take concrete action, seeking the Truth. It is nothing about gaining knowledge, rather, Yoga is about realizing the Truth with your very being.

Today is our new beginning.

With humble dedication to our Honorable and most Beloved Master,
Satguru Shri Mahayogi Paramahansa,
We bow in gratitude.