EXPERIENCE:
NY Gurubai’s Visit to Japan, Winter 2016
and Its Synchronization with Pranavadipa Vol. 17: 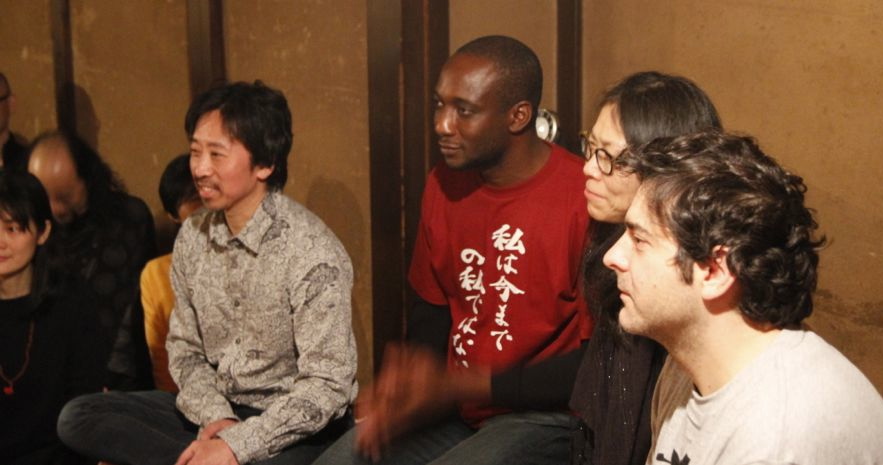 7PM. Satsangha at the Ashrama.

Every moment of having the opportunity to see Shri Mahayogi is filled with excitement and blessings. Once again, we were so fortunate to be able to attend Satsangha at the Ashrama and to be with Shri Mahayogi one more time before leaving for Tokyo on Monday!!!

When Satsangha began, Shri Mahayogi immediately noticed the T-shirts that Ryan and Aniruddha were wearing and laughed joyously. On Ryan’s T-shirt the word “Disciple” was written in Japanese and on Aniruddha’s, “I am not the way I was before.”

Anandamali reported to Shri Mahayogi about how their stay had been up until that point, and Shri Mahayogi seemed very pleased with the NY brother’s willingness to learn, their spirit of readiness for taking on challenges by adopting the learner’s mind and attitude, along with their discipline to follow the morning schedule at all costs. Taka and Yohei spoke about how they had been witnessing the transformation of their NY brothers, and they expressed how grateful they were to have this opportunity to host the NY brothers and practice along side them. Some gurubhai light heartedly teased Ryan, saying that he seemed to have already lost weight. There was much joyful laughter in the beginning.

Then Nandiswara presented Shri Mahayogi with some words he had written on a piece of paper in Chinese, and asked him to explain the meaning. Some of the Chinese and Japanese characters are the same or similar, so sometimes we can understand one another through writing. The words that Nandiswara wrote were『無一物中無尽蔵』. That day, in the room where Satsangha is always held, a scroll was hanging with a work of calligraphy done by Shri Mahayogi, upon which was written the same phrase: 『無一物中無尽蔵』. Shri Mahayogi explained the meaning of this saying, which is often used in calligraphy in Zen Buddism:

So, “the Absence of Ignorance and Pain-bearing Obstacles” = “The state of the mind that is empty and transparent”.

無尽蔵 ＝ Non-Ending Space = The Entirety of Space or the Universe

無一物無尽蔵 ＝ In the Entirety of the Universe there exists one state that is Empty, Void of Pain-Bearing Obstacles = Bliss exists in the state of Emptiness.

CONCLUSION: Make the mind free from Pain-Bearing Obstacles and Ignorance.

Shri Mahayogi always says that the teachings of Buddha and Yoga are completely identical. He explained the following mechanism:

Karma creates suffering in life —tracing back to the cause of suffering→ desire, which is the attachment toward the pain-bearing obstacles in the mind; this is what creates karma.

CONCLUSION: By eliminating ignorance and the pain-bearing obstacles, all suffering ends. True Bliss exists there. 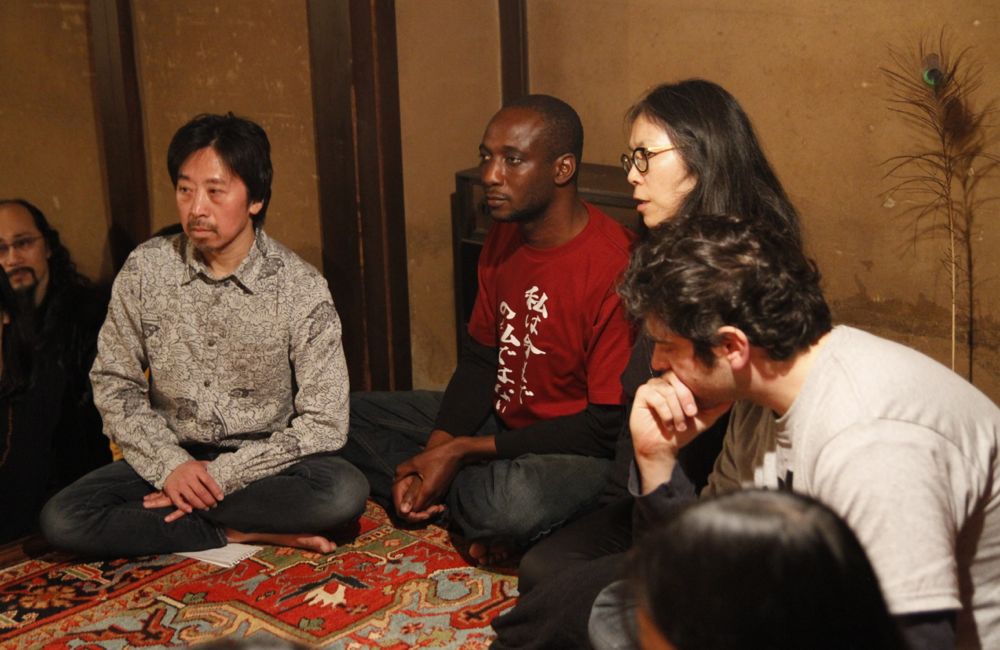 Ryan asked about how to proceed in the practice of discrimination. He wanted to know if he was approaching it correctly. He explained that he is currently trying to understand why it is that there is even something in his mind that desires. He noticed that this feeling of desire, or the value of an object only exists because he once had something and then lost it. He noticed that his mind only perceives two states: having and not having. Generally speaking, when he is in the state of actually having, there is no awareness, so it is only after the loss of it that he enters into a cycle of desiring similar types of things.

Shri Mahayogi answered that Ryan must go further, examine the issue and discriminate whether the object of that desire is eternal or not, whether it is universal or not. By doing so, he will recognize the mechanism of the chain of desire that the mind itself creates based on specific conditions; and therefore truly realize that these are not the Truth. And what’s more, he will recognize that it is a mistake to attach to things that are not the Truth. This is discrimination. If he comprehends the essence like this, then the mind will become detached from that desire—that is renunciation.

Nandi then asked how to know whether an intuition is correct or not.

Shri Mahayogi answered that it goes without saying that practicing asana and studying the teachings of Yoga is a precondition. And that it is especially important to discipline oneself in yama and niyama so that one’s thoughts, words, and actions would not contradict one another. Through continuous practice, the mind transforms and its nature becomes the quality of sattva, and through having its nature be the quality of sattva, correct intuition comes. That too is about training. By continuously training one’s thoughts, words and actions to correspond to an intuition or that first flash of thought, the mind will ultimately stop generating all other unnecessary thoughts. By practicing this diligently, intuition will come precisely in the moment needed.

Satya mentioned that she has a habit of sometimes letting her mind wander, and she knows that she needs to practice mauna at that moment. She asked for confirmation that by practicing to make the thoughts, words and actions correspond to one another, that the condition of ‘being empty’, or the original condition, would increase.

After confirming that Satya was correct, Shri Mahayogi added that the word ‘empty’ in Japanese is written as 空（sky; void; empty), but in Sanskrit, ‘empty’ is sukha, which also means ‘easy‘, just as sukha is used in sukhasana (sukha-asana), commonly known as ‘easy’ sitting position.

It was fascinating to hear that the word ’empty’ has a connotation of ‘easy’, as a profound metaphor lies within this association. Shri Mahayogi never ceases to amaze us with his depth of knowledge and ability to see beyond the surface!!!

With this addition, Shri Mahayogi pointed out exactly what 『無一物無尽蔵』is all about!!!!

In the Entirety of the Universe there exists one state that is Empty, Void of Pain-Bearing Obstacles, meaning that Bliss exists in the state of Emptiness.

By eliminating ignorance and the pain-bearing obstacles, all suffering ends, resulting in the state that is Easy and Empty, where True Bliss exists.

At the end of Satsangha, Aniruddha spoke on behalf of the NY brothers to express their gratitude to Shri Mahayogi:

“Shri Mahayogi, we can’t thank you enough for having us. I am quite sure that on this trip the three of us have truly learnt a tremendous amount from the gurubhai here. And the fact of the matter is, we saw a lot that we still need to process. And I guess, just from speaking between us, we can see what a life changing opportunity this really has been. We just hope that we can take this spirit back with us to the NY sangha and really try to help it grow toward this, toward what we have experienced here, in some way. We gratefully hope that on your next trip to NY, we can really offer to you a very warm welcome. Yes, we gratefully look forward to seeing you in New York.”

Shri Mahayogi responded with a huge smile,
“Thank you. That is good. I am so glad. I look forward to seeing you in New York again.”

There was a congenial atmosphere after the Satshangha. Everyone’s face was shining.  As people began to leave little by little, some moved to the side and began participating in a MYM work meeting.

We wished we could have stayed there forever. But it was time to turn the page and move on to the next chapter; to work towards being able to show the proof of our growth for the next reunion with our beloved Master in New York. 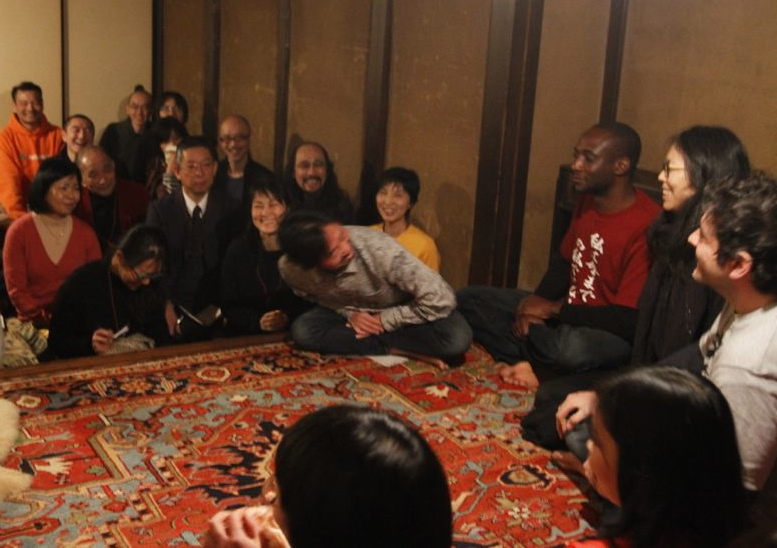 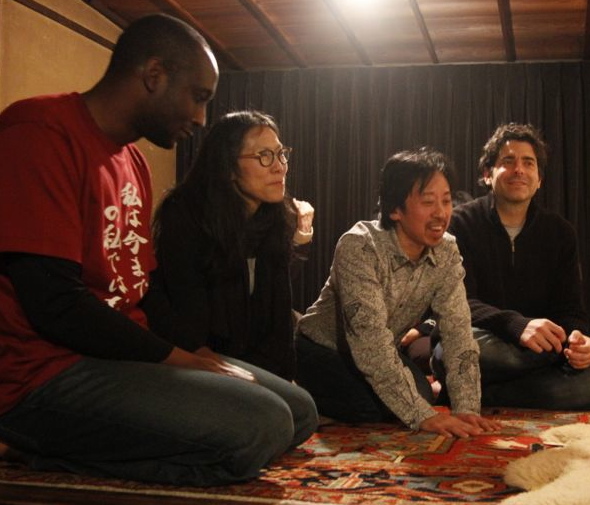