In the western world, Yoga is often used to refer to the physical postures, called asana, which make up a small part of what is known as Raja Yoga, an eight-limbed scientific path to reaching the ultimate state of Self-Realization. Because there is so much emphasis in the West on “Yoga” being synonymous with “asana”, it may not be common knowledge anymore that the aim of the practice of Yoga actually is Self-Realization, rather than merely to achieve some physical benefits or relaxation.

At the same time, for those who are seeking Self-Realization and who have studied the paths taught by the Masters of the past, such as Shri Ramakrishna, Ramana Maharishi, and Paramahansa Yogananda, it may seem that asana was not taught or emphasized as part of that path at all.

Considering that, it may appear to be difficult to unite the teaching of asana (at least how it has come to be known and popularized today) and the path to Self-Realization. And we may even wonder whether one is part of the other or not. Yet, Shri Mahayogi is here now, a living Master, and he is teaching asana practice as one of the first steps along this same path to Self-Realization—to Yoga—that the Masters of the past have also taught since ancient times, or we should say that that was how the practice of asana began in the first place.

So, what is the difference? Why does it seem that asana has a role in this path?

During last Sunday’s Sadhana Program with Shri Mahayogi, a new attendee inquired exactly about this topic. Here we would like to share with you his question and Shri Mahayogi’s words in response.

Q: What exactly is the role of asana practice in Self-Realization?

“The purpose of Yoga is to know and to realize the Truth. Then the question is: What is that Truth? It is the true Self, that is, God, which is also called Truth. Normally, the “I” that the mind believes itself to be is this body or the mind. But they are not, they are not the Self. The true Self is not the mind, It is the Pure Consciousness that witnesses the mind. The mind is always seen by that Consciousness. However, because it seems to be that the mind sees, as if it is identified with that Consciousness, the mind does not know the true Self. The various workings of that mind are the karma or the attachments towards this world; and the root cause of all of them is what is called ignorance. Therefore, what you must do is to purify the mind to be clean and transparent. If you do that, then the true Self will be awakened by itself. That is the entire path of Yoga. Yet, there are so many obstacles in the mind that are dormant. In order to eliminate and remove them, a year or 10 years of practice are not sufficient. In most cases this is the work of a lifetime. If you cannot complete it in this lifetime, then you should continue to exert effort to attain it in the next lifetime. Even so, while in search of the Truth it is better to go closer, even one step, or two steps closer towards the Truth, rather than clinging to the transient phenomena of this world, the things that are false.

Indeed, the mind has to be brought under control and restrained. However, catching the mind is difficult, just like trying to catch the wind. So, then what about water? If you use a container, then you will be able to catch the water. If it is an ice cube, it’s even easier. These are all made of H2O. The body corresponds to the ice cube. For that reason, by practicing asana, you first practice to attempt to control the body. In order to live in this natural world, the body always receives stimulation [from the outside] and becomes agitated, just as does the mind. So, the purpose of asana practice is to make the body healthy and strong, and into the body of a yogi, which remains unaffected no matter what conditions the body is under. And then if the body is well-conditioned, the path of prana that flows inside the body will be purified. That is to say in other words, to condition the breath. If the prana is getting controlled, then simultaneously, it will lead to the calming of the mind. Then the mind will come to be unaffected by various stimulants, and at the same time a very keen power of concentration arises. Using this, you concentrate on the Truth, and meditate on It. At the same time, you strive to purify the mind. Through practicing this way, the mind will actually come to be transformed completely. That means that it is becoming prepared for the real Self to emerge on its own, because It is what is undoubtedly the true Self within all of you.

I would like you to continue practicing these asana [that we practiced in the class today] for some more time, then study and learn the scriptures. By scriptures, I mean the ones that have gathered the words of Truth from Enlightened Beings, or Saints. So [since these are worthy of learning], I would like you to study hard and learn them well. Then practice meditation. Then that would be good. Here [in the class] we carry a very small book, and it will help you on your journey, at least to some degree.

So, now I’ll end the class for today.”

In modern times, we want to get results instantly, we want to know what the manual says or what technique we should use right away. But clearly that is not how the practice of asana can be. Just like how the practice of Yoga was not revealed unless someone searched for it seriously, longing for it more than anything else in life, the secret of asana too was only revealed to those who were seriously seeking Yoga. Information is abundant nowadays. Yet, the key to know and experience or to realize the Self cannot be attained through doing some kind of “technique” only for a temporary time, or by applying a “technique” that we’ve read about or heard about from just anyone. The real secret is only revealed by putting our body and mind to work, to bring them under control and purify them under the direction of a true guide who has attained the goal. That is why we need a Guru, One who knows how to bring his or her students to that same state of attainment. That is why Yoga cannot be known through intellectual knowledge, but only through actual and persistent devoted action and practice under the guidance given by a Guru. For this reason, the company of sangha is also essential as a way to support one another in learning. In this sense, although Yoga seems to be known now far and wide, true Yoga still remains practically unknown. Yoga is by nature empirical—it is nothing theoretical or philosophical.

We have mentioned several times that the asana that Shri Mahayogi teaches, though the forms may look similar to what is being taught in a multitude of schools, has a content and purpose that is entirely different. As we practice this asana, without a doubt we will discover this for ourselves and come to understand little by little why asana has a role in this path, and why it is a necessary step in the present time for many who wish to walk towards Self-Realization.

We invite you to practice and begin this discovery for yourself.

Tomorrow we will hold the final Sadhana Program with Shri Mahayogi for this visit to New York. Please do not miss this last opportunity to learn, practice and experience Yoga under the direction of a true guide who is in the state of Yoga, the Honorable Master, Satguru Shri Mahayogi Paramahansa. 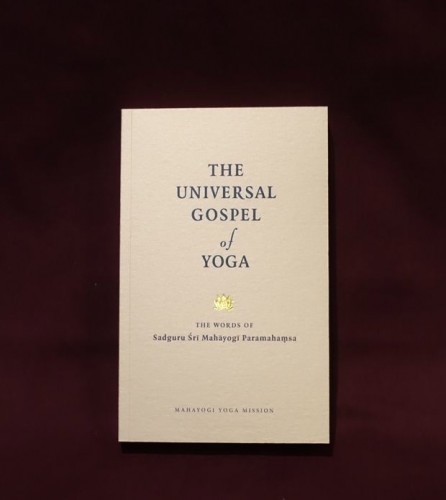 Here is The SMALL BOOK that Shri Mahayogi mentioned at the end of the class. It is called The Universal Gospel of Yoga. We actually only have a small stock still available for purchase.

Contained within this Gospel are the uniquely comprehensive teachings of Yoga and its practice, excerpted from conversations between Shri Mahayogi and his disciples and devotees. With the sole purpose of Awakening ever-present from beginning to end, he sheds light on the various teachings, practices and disciplines of Yoga. From the physical, such as asana practice and dietary suggestions, the most practical of daily matters, to the most subtle inner-workings of the mind, all is made practicable for the seeker of the modern age. If practiced diligently, the teachings in this Gospel have the power to clearly and precisely direct the seeker to an ever-deepening understanding of the true purpose of life—which is to awaken to the immutable and eternal Truth.

Published originally in Japanese, SATORI-AWAKENING, features a collection of teachings delivered live in public satsangha in Kyoto, Osaka and New York from 2000 to 2006.  This exquisitely designed and unique book contains actual dialogue between the Master, Shri Mahayogi, and disciples or devotees and demonstrates how the teachings of a living and true Enlightened Being lead us to the realization of our universal reality—our True Self.  As we read, we gradually touch upon the purpose of our existence, and understand Yoga as both the method and the goal of our spiritual quest.