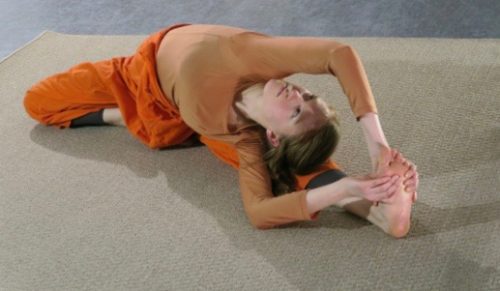 Asana by a Seeker of Truth

When the sleeping Kundalini is awakened by the grace of the Guru,
then all the lotuses (the chakra) and the knots (granthis) are pierced.
—Hatha Yoga Pradipika, Ch.3, V.2

The great Goddess (Kundalini) sleeps closing with her mouth
the entrance to the way (the sushumna)
by which the seat of Brahman (Brahmarandhra),
where there is no pain, is to be reached.
The Kundalini-shakti,
who sleeps above the kanda (muladhara),
gives liberation to the Yogi…
He who knows her knows Yoga.
The Kundalini is described as being coiled like a serpent.
He who causes the Shakti to move (from the muladhara upwards)
becomes free, without doubt.
—Hatha Yoga Pradipika, Ch3. V106-108

Kundalini…perhaps you have heard of it? It is the great force of prana that lies dormant at the base of sushumna nadi, the base of the spine. Although it is referenced a number of times in the Hatha Yoga Pradipika, one of the classic Yoga scriptures, most likely the majority of people nowadays have heard about it in reference to some kind of fantastical spiritual experience, or at the very least, in relation to the opening or activation of the chakra, the various energetic centers that fall along the path of the spine.

But even though talk of “spiritual experiences” is now often intertwined with talk of “kundalini” or “chakra,” how much do we really understand about what it all really is? And how often do we encounter a teacher who can truly guide us based on his or her own intimate experience of it?

This month’s Pranavadipa (Vol. 39) gives us a unique glimpse into this very topic. Shri Mahayogi graciously responds to the inquiries of a seeker as she strives to make sense of her own experience of changing prana and understanding of the rise of kundalini.  Shri Mahayogi not only expounds on the more technical aspects of prana, kundalini and the chakra, but he also speaks about the actual likelihood of the true occurrence of kundalini rising, what blocks it from rising and then guides her to practice looking beyond this phenomenon towards the ultimate aim of Yoga.

As we walk the path of Yoga, there are many opportunities for us to receive guidance. And one of the most important ways is through our fellow gurubhai. If we look to the practice of our fellow gurubhai, we can often find clues for how to concretely further our own practice, as well as fresh inspiration. And there is no doubt this is one of the three treasures described by Buddha: Buddha, Dharma and Sangha. In this month’s Testimony (Vol. 39), which touches on the key to the breath in asana, Sadhya, a disciple from New York, writes about the inspiration she received from watching Yogadanda, a gurubhai who was visiting from Japan, practice asana in the class. Five years later she would go to Japan, and interestingly enough, having advanced in her asana practice, she was then asked to demonstrate during the class for the gurubhai there, including Yogadanda. Seeing her awe-striking demonstration took everyone’s breath away. As a result, the gurubhai in Kyoto have become inspired by her practice, of course.

The content of this month’s Testimony reveals a glimpse of Sadhya’s journey through the practice of asana and what she has recognized as the result of the depth of her practice as a true seeker. This also reveals what the asana practice taught by Shri Mahayogi is. She is definitely on the way to discover, with her understanding going deeper and deeper, what the true asana is that Shri Mahayogi is bestowing upon us. 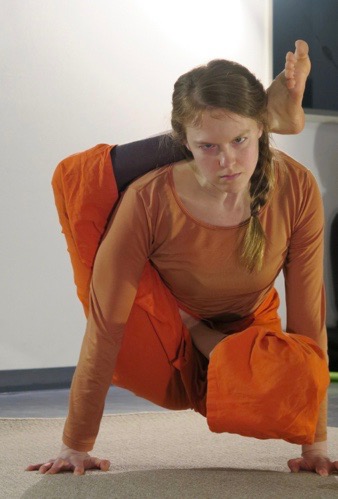 After the demonstration, she answered questions from the attendees.
Everybody was surprised to hear that she works as a high school teacher, no different from anyone else. There were new students in the class that day, and they too were inspired to continue to practice. 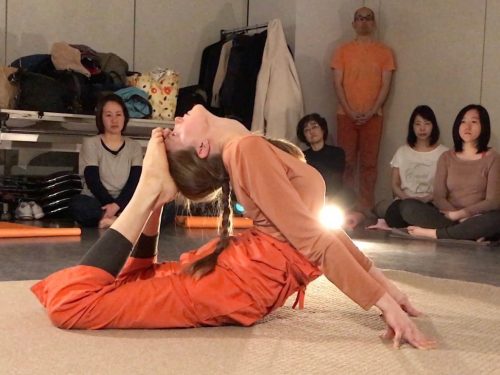