EXPERIENCE:
NY Gurubai’s Visit to Japan, Winter 2016
and Its Synchronization with Pranavadipa Vol. 17:

Part 3: DEMONSTRATIONS OF THE WILLINGNESS TO KNOW 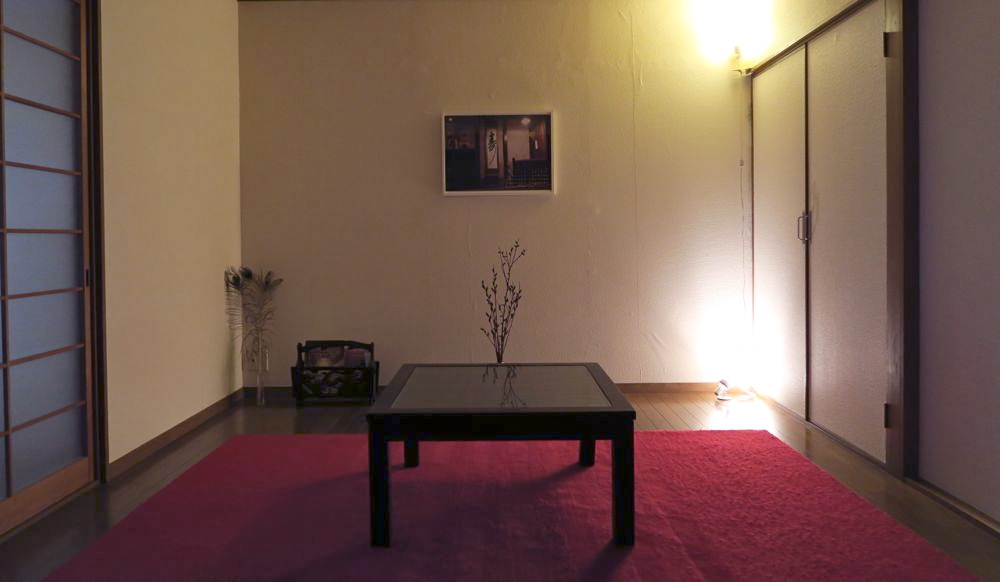 The living-dining room at Shanti Kutira, where the gurubhai would meet, have meals, practice daily meditation and, on the days when there was no class, practice asana.

On Monday, both Taka and Yohei were working the night shift that night, so they didn’t arrive home until around 9:00 or 10:00 AM. Regardless, the NY gurubhai began their sadhana and house cleaning at 6:00 AM and made breakfast all by themselves. They also took care of the laundry. Before noon, Anandamali joined them and took them to the Shinto Shrine of Kitano Tenmangū (photos in Echo 40), which is 10 minutes by bicycle from Shanti Kurtira. We then had a Yakuzen lunch (medicinal Korean meal) near the site, and spent a good bit of time talking amongst ourselves about this trip and their impressions of Japan. Since the NY gurubhai were scheduled to attend the 2-hour self-practice meditation at Yoga Vihara that night and then spend time with Yogadanda after that, in the late afternoon they practiced asana and meditation at Shanti Kutira by themselves for the first time during this trip.

In the evening we attended the two-hour self-practice meditation at Yoga Vihara. In the early summer of last year, Yogadanda and Kripalu started to practice this voluntarily—their intention was just to sit continuously in silence for two hours, and to just continue to discipline themselves to practice it regularly every week. Seeing and feeling their persistent actions, other gurubhai became inspired, and now they join them from time to time. That Monday night about eight of us practiced there together. 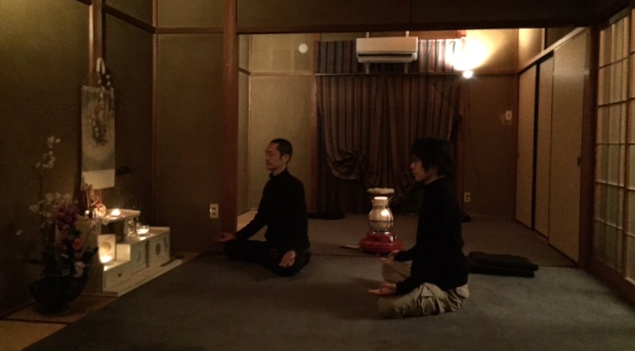 After the meditation, they spent time with Yogadanda. Much of the conversation was between Ryan and Yogadanda and it was about the practice of self-inquiry and discrimination.

Nandi asked Yogadanda what he has been meditating on. Yogadanda said that in the past he practiced jnana yoga, but now his meditation is to meditate on Shri Mahayogi, and it is only when the need arises that he practices discrimination in meditation. Then Nandi asked why he switched to a bhakti practice from a jnana practice.

Yogadanda answered that he had been practicing the meditation of jnana yoga for some time. He was often told by Shri Mahayogi that passion is crucial for the practice of jnana yoga, but he was not able to understand what that meant. But then he was given the role of Natcheketas in one of MYM’s public performances, “Amrita,” in 2005. He concentrated on practicing for the play all the time, repeating his lines which were filled with the passion to realize the Truth even at the cost of his life, and practicing his role again and again. By concentrating keenly on the mind of Natcheketas, he took the approach of trying to really know Natcheketas, who had staked his life on knowing the answer to the question of what would happen after he died—to realize the Truth. Yogadanda said that he sensed that what Natcheketas was doing—throwing himself completely into the meditation of facing his own death, plunging into death and seeking further beyond it—was the true meditation on death. So he tried to meditate just like Natcheketas did. And in doing so, it was as if he became able to concentrate on the jnana yoga meditation, which intensified his practice. Yogadanda’s concentrated state continued even after the day of the performance, and because at that time his situation afforded him a lot of spare time, he spent many quiet hours in meditation. However, as his situation changed, it became very difficult to concentrate on the subtlety of the process of jnana yoga, so he switched to bhakti meditation. Through his experience, he felt that pursuing the practice of jnana yoga is a very tough thing to do for people of the modern age.

Yogadanda also said that sometime after the day of performance, he had the opportunity to go to his hometown in Kyusyu, the southwestern area of Japan. Since he was not engaged in much of the work of the MYM or any other responsibilities at that time, while he was staying at his parents’ house he meditated continuously, except during meal times. He was focusing in the meditation on death. And, in the sense of seeking out the real Self beyond the death of the mind, it was exactly the same as seeking, “Who am I?” or the self-inquiry of the jnana yoga practice. Yet, there was no awareness of what types of yoga he was practicing, he was just in a state where he continuously and simply did nothing but concentrate. Notwithstanding his continuous striving, after ten days of his efforts yielding no fruit, he returned to Kyoto.

One night, when Yogadanda was working the night shift as a social worker, as he oftendoes, the result came to fruition. After aiding the receiver of his services in falling asleep, he started to meditate on his futon. After some time, his concentration was interrupted, so he simply lay down. And right before he fell asleep, the intuition came suddenly that, “I am dying!” In the next moment, it was as if an electric shock was running through his body and it went rigid. The body experienced the state of death, then his consciousness became separated from the body. But, right then, the receiver of his services woke up and called for Yogadanda, so he was immediately forced to come back from meditation.

(Recently, Yogadanda mentioned that the reason he could not concentrate on the subtlety of jnana yoga was that after this experience—this unfinished meditation on death—he could not continue to maintain the heat that is crucial for jnana yoga’s concentration, which he had been doing up until then. He thinks that there may have been many factors. Perhaps his situation and circumstances had become so busy that he did not really have time to meditate as much as he had been, and probably he was not fundamentally equipped with the tendency toward or had not yet gained the temperament of a jnana yogi, etc…)

Ryan said that he doesn’t feel that he has pressing issues right now, or that if he does then he cannot go any further in the practice of discrimination, beyond the intellectual level, or that he often easily accepts his desires. Yogadanda advised him that it all depends on how crucial the issue is for the mind. Otherwise the practice of discrimination cannot go further to the point at which the mind itself completely transforms.

After an hour or so, Yohei joined in after attending a meeting downstairs. Hearing what Ryan was saying about the practice of discrimination, and after observing him for a few days, Yohei was concerned and began questioning Ryan’s understanding of it. So Yohei offered an example from his actual practice of discrimination that he experienced at one point, hoping to help Ryan:

In the past, Yohei fell into the habit of reading magazines at convenience stores without buying them. But one day it stood out to him that the magazine was spelled Ragtag-Magazine (雑誌=雑+誌) in Japanese. He felt that as long as he continued this habit, his mind would continue to be disturbed, and he concluded that it is the direct opposite of subtle meditation, so from that moment on he completely stopped reading them. After two years of continuously practicing like this, one day Yohei spoke about it to Shri Mahayogi. Then, Shri Mahayogi said with smile, “You have actually become able to discriminate well.” Until Yohei heard these words, he did not think that what he was doing was discrimination on that matter. But Yohei remembered that sometime ago when he spoke about his meditation with Shri Mahayogi, he sensed that Shri Mahayogi uses “name” and “form” when trying to go into the essence of things. So Yohei tried to apply what he had observed and learned from Shri Mahayogi to the magazine.

Aniruddha asked for advice on what to do when he has issues that he would like to apply discrimination to, yet he is having a hard time concentrating on actually doing that discrimination in meditation. Yohei answered that Shri Mahayogi once mentioned during satsangha that the mind too has ups and downs, like a biorhythm, and if you cannot do discrimination for whatever reason, then put it to the side and concentrate on God. Yogadanda then explained that when the biorhythm of the mind is low, the issues of the mind are hidden under the sub-consciousness, or not clearly seen on the surface, making it difficult to apply discrimination to them because even if you are looking it is hard to find them. On the other hand, when the issues appear on the surface of the mind, they can be easily grasped. That is why Shri Mahayogi said that if you cannot do discrimination in meditation, then put discrimination to the side temporarily.

It was that night that something appeared to start hitting Ryan much more deeply.

(The journey continues… to Echo 44)